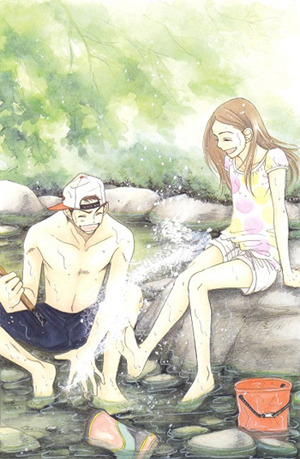 Sand Chronicles, or Sunadokeinote Hourglass, is about the story of Ann Uekusa from her adolescence to adulthood and of the friendships, relationships, and conflicts she encounters along the way.

When twelve year old Ann Uekusa moves from Tokyo to a rural country town named Shimane with her mother following her parents' divorce, Ann has trouble adjusting to her new home and life until she meets and befriends a boy named Daigo Kitamura, and two rich siblings named Fuji and Shiika Tsukishima. Ann's happiness is brief, however, when her mother commits suicide, leaving Ann with an eternal emotional scar. That is when Daigo promises to always be with her, and the two slowly begin a slowly but surely blossoming romance that has many obstacles along the way...

Created by Hinako Ashihara, Sand Chronicles is a well-regarded shojo manga series for its realistic yet emotional portrayal of growing up and the ups and downs that come with it. In 2005, it was awarded the 50th Shogakukan Manga Award for shojo manga, and in 2009 the Young Adult Library Services Association recommended it

in their "Top Ten Great Graphic Novels for Teens" list.

The manga ran from 2003 to 2006 in Betsucomi and comprises 10 volumes - the first 8 volumes cover the main story which comprises Ann's life from ages 12 to 26, and the final 2 cover chapters and omakes that occur both before and after the main story. Each volume consists of just 2 yet very long and intense chapters. It also has both a 2007 Japanese drama adaptation and a 2008 Japanese live-action movie adaptation.

The manga is licensed in English by Viz Media, which also serialized the manga in their English shojo magazine Shojo Beats (though not completely, due to said magazine's eventual cancellation in 2008). The manga's also been translated and released in Germany as Sunadokei - Die Sanduhr and France as Le Sablier.

Has a Character Sheet. Take heed, that page has more unmarked spoilers than this page.

The manga provides the following examples: