Manga / The Record of a Fallen Vampire 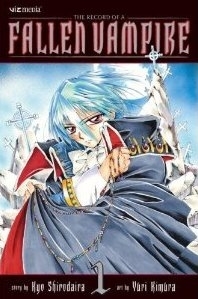 Record of a Fallen Vampire (Japanese title: Vampire Juuji-Kai, or "Vampire Cross-World") is a manga written by Kyo Shirodaira and drawn by Yuri Kimura. It was serialized in Monthly Shonen Gangan from 2003 to 2007, and collected into 9 volumes.
Advertisement:

A millennium ago, the vampire queen Adelheid nearly destroyed the world for the love of her king, unleashing the dangerous "moonlight of corrosion" which destroyed everything in its path. In the end, she was sealed by the power of vampire, dhampire, and human alike; but her king, Akabara "Red Rose" Strauss, searches the world for the seal that will release her from her captivity. Humanity at large has since forgotten the existence of vampires, but the dhampires remember, and they will do whatever it takes to kill Akabara before he rescues his beloved queen.

Against Akabara is Bridget, powerful ruler of the Dhampires and a group of elite warriors including Jin, whose beloved was killed by Akabara. With them is the Black Swan, a parasitic magic that possesses young women for the sole purpose of killing Akabara and Adelheid. The most recent host is strong enough to kill Akabara, but she instead sides with him, to the shock of the dhampires. It seems things are not as simple as they seem and old enemies may have to unite to survive.