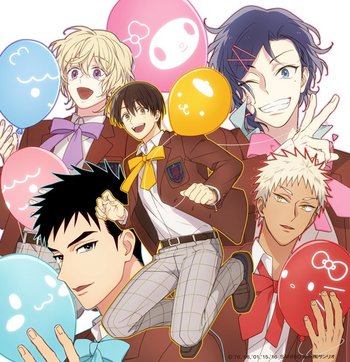 Never without my favorite friend.note From center, then clockwise: Kouta, Yuu, Shunsuke, Seiichirou, and Ryou.
Sanrio Boys is a web-based franchise created by Sanrio to promote merchandise for some of their biggest characters. It was originally conceptualized as a Twitter account

Later additions to the roster include Subaru Amagaya, a delinquent-like fellow who loves Badtz-maru, and Naoki Sugami, a stoic teacher that loves Keroppi.

The idea was so beloved by its main demographic that it expanded to include two different manga adaptations by Mai Ando in the Spring of 2016, a smartphone-based Visual Novel that Fall, and an anime adaptation part of the 2018 winter lineup. It also eventually received its own line of character merchandise, and a stage play series.

Tropes in Sanrio Boys include: