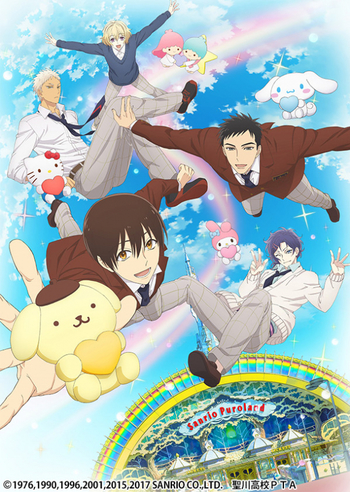 At the prestigious Sanriio Military Academy, Yuucisus and Shuun, two knight candidates, stand at odds as Sei and Riyon refuse to intervene. In order to stop the infighting between his two precious friends, Koural steps in between them. He dies, but he manages to bring them back to their senses. The End.

Or is it? Nah, it is just a school play. The real story starts much earlier.

Kouta Hasegawa, 17 years old, is a second-year high school student who hides a secret: he is very fond of Pompompurin. He was open about it when he was younger, but bullying by other kids changed that. This caused Kouta's relationship with his grandmother to crumble, and she passed away before he could apologize. He starts going through life keeping his love for Pompompurin a secret, having little to look forward to otherwise.

All of this changes when Kouta accidentally finds a cutesy My Melody keyholder belonging to Yuu Mizuno. Much to his shock, Yuu isn't afraid to admit liking My Melody. Slowly, Kouta begins to bond with his fellow cuteness fans at school, gradually learning to accept himself and being open about the things he likes.

Sanrio Boys (Sanrio Danshi) is the Animated Adaptation of the franchise of the same name by Studio Pierrot in January 2018 as a part of the Winter 2018 Anime season. It can be legally viewed on Crunchyroll here

Tropes in the Sanrio Boys anime include: