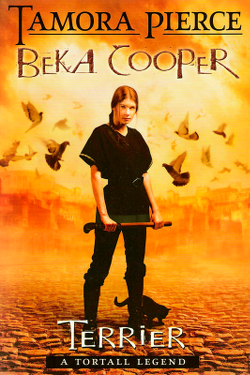 "The Lower City is mine. Its people are mine. If I find them that's doing all this kidnapping and murdering, they'd best pray for mercy, because once I get my teeth in 'em, I will NEVER let them go."
Advertisement:

The fifth series — but chronologically, the first — in Tamora Pierce's Tortall Universe. In an effort to make him give up his thieving ways, Eleni Cooper gives her young son George the journals of a famous ancestor: Rebekah Cooper, an officer in Corus' nascent police force. Known as "Dogs", they did their best to keep the peace, often walking a fine line between lawkeeper and outlaw. The series follows Beka from her entry onto the force as a trainee through a tumultuous period in the country's history. Rather than sorcerers and kings, Beka's enemies are slumlords and counterfeiters. With the ability to hear the souls of the dead, Beka swears to protect the common people of her city from those who try to victimize them.

The Beka Cooper books are the longest of any of Tamora Pierce's works and the first story to be written as a trilogy. It is also the first book to feature the commoner side of Tortall life as the main character in both setting and people, which is much darker and messier than the palace.

The trilogy has three books: