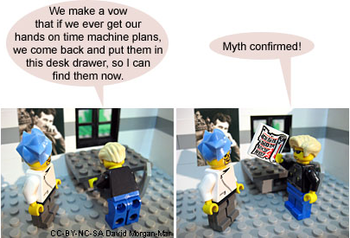 I must remember to add an image here in the future...
"This always made much more sense to me - that there would be a spark at some point along the loop, some sort of injection of energy or effort of will which kicked it all off, someone who decided one day: "What's needed here is a causal loop.""
— Things of Interest, discussing how time travel works in Bill and Ted's Excellent Adventure
Advertisement:

A Time Travel trope, Retroactive Preparation is an intentional use of You Already Changed the Past where the existence of a Stable Time Loop works to the advantage of the character's goals rather than thwarting them.

Let's say your favorite show is about to air, but you forgot to program your VCR or DVR to record it. You run up to your front door to set that up, discover it locked, and realize you don't have your keys. What do you do? Break a window? Bust down the door? Drop down the chimney? Watch it at a neighbor's house? Hurry! There's less than a minute left! Oh, if only you'd thought to leave a Key Under the Doormat or something!

But wait! You have the next best thing: A time machine!

Secure in that knowledge, you look under the doormat and discover the key — it's been left there for you by your future self. Thanks to future-you, you've been prepared the entire time.

If you have a time machine, then no matter what hurdle is set before you, you have all the time in the world to prepare for it after you've already overcome it, even if you are running on San Dimas Time. This rule mainly applies when the situation can be solved by having the right equipment at the right time, and the people in said situation are aware of the Stable Time Loop. It's like being Crazy-Prepared, minus the foresight. After you "discover" your key and watch your show, you just make sure to use the time machine and put the key under the doormat for your past self.

Of course, there's no need to actually show anyone setting it up, just the end results.

If it is shown getting set up, sometimes a very strange thing will happen: The time traveler might end up rigging both the way past and original obstacle, e.g., when you're putting the key in place, you discover the door was left unlocked, and you know it 'was' locked, so you lock it.

Compare Tricked Out Time, the circumvention of the Stable Time Loop, and contrast You Already Changed the Past, the failed attempt to Set Right What Once Went Wrong. See also Temporal Paradox.