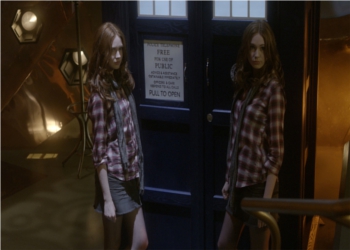 Oh no, I've all gone cross-eyed...
"This is how it all ends: Pond flirting with herself. True love at last."
— The Doctor
Advertisement:

The one with the wibbly lever and us seeing double.

The episode opens up in the TARDIS, where the Doctor is busy working away at the console, when Amy comes to speak to him. When it's a choice between conversation and fixing his motor, the Doctor decides the latter is preferable and brushes Amy off. Not to be deterred, Amy continues to pester the poor Time Lord, saying she just needs to ask him something important. He promptly begins to call for Rory.

Feeling frustrated, Amy is surprised to see Rory is right there — underneath the console, fixing it along with the Doctor. A little miffed about being left out, she asks why he gets to help out. Rory points out that Amy is rubbish with machines: she can't even drive a car. (Point in fact, she can drive the car as long as there are no unexpected houses to crash into).

"You're just jealous because I passed my test first time," Amy says smugly.

"You cheated," Rory asserts. How? She wore a short skirt. "Have you ever seen Amy drive, Doctor? Neither did her driving examiner."

What? Of course she didn't wear a skirt (Rory notes that would have worked, too). Actually, it was a skirt but it was any old skirt. Oh, wait, no, "it was this skirt."

Suddenly, the ship is jolted and turns dark. When Rory was distracted by Amy's skirt through the glass floor above him, he accidentally dropped a thermo-coupling, which the Doctor specifically asked him not to do. Thankfully, everything should be fine. There was an emergency materialisation, so the ship should have safely landed wherever there was room —

Sitting proudly in the center of the TARDIS is a blue police box.

Rather unnerved, the Doctor goes to investigate the police box. He cautiously disappears through its doors — only to re-appear through the inside of their TARDIS doors. He spends a few moments playing with the rather Escher-like dimensional paradox, which Rory admits is pretty cool. Good thing too, because they'll need something to entertain themselves now that they're trapped for all eternity in an infinite loop. Because now, nothing can ever enter or leave this ship again.

Cue a second Amy walking in through the ship's doors.

"Okay, kids, this is where it gets complicated."

Turns out that the police box has now drifted in time, so by going through it you can appear a few seconds in the past. This second Amy has come from the future because the Doctor just told — or will tell — her to go back and explain what's happened. Amy doesn't really understand, and future-Amy says she still doesn't; she's just repeating what she remembered her future self said.

In fact, everything she says has to be like she remembers, in order to keep the timeline stable. As such, the Doctor asks when present-Amy goes into the box, which she says will be right after she slaps Rory. Rory is not particularly happy with the idea of being slapped without having done anything, but after he seems a little bit too pleased by there being two copies of his wife around, present-Amy slaps him for that. So into the box she goes.

Not before she gets to flirt with herself first, of course.

Finally Present-Amy leaves, making Future-Amy Present-Amy. Which is all well and good, except they're still trapped...

And then Amy and Rory come running into the console room.

Once again, they came because the Doctor told — will tell — them to get into the police box. More confusion and flirting commences, the Doctor presses our present pair of companions into the blue box, leaving us with the normal set of companions. So, what now?

Well, the Doctor can get them out of this incredibly confusing loop, but only if he uses the right lever. If he uses the wrong one, the TARDIS will implode and they'll all die. "You don't know which lever," says Amy, disbelieving.

And then another Doctor runs into the ship. "The wibbly lever!"

He pulls the wibbly lever, and runs into the police box, just as it begins to dematerialize. Finally, it disappears, freed of its own infinite regression of time and space. There's no danger of accidentally dying, or blowing a hole in all causality. "But just in case: Pond, put some trousers on."