Literature / The Salmon of Doubt 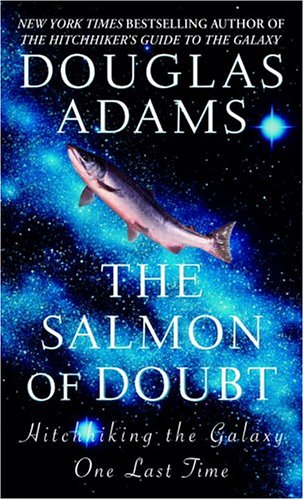 what are you doing in space salmon youre a salmon you dont belong in space you cant even breathe there
Dirk Gently, hired by someone he never meets, to do a job that is never specified, starts following people at random. His investigations lead him to Los Angeles, through the nasal membranes of a rhinoceros, to a distant future dominated by estate agents and heavily armed kangaroos. Jokes, lightly poached fish, and the emergent properties of complex systems form the background to Dirk Gently's most baffling and incomprehensible case.
— Douglas Adams in a letter to his editor, describing What Could Have Been a really wild book.
Advertisement:

The Salmon of Doubt is an unfinished manuscript by Douglas Adams, left in that state after the author sadly hitched a lift to the Great Beyond. Its exact nature is, and forever will remain, unclear: it started life as a third Dirk Gently book, but the author later implied that it wasn't working out that way, and that he might change it into a sixth Hitchhiker's Guide (partly to end the series on a happier note after the bitter fifth book). However, it contains strange passages that don't fit neatly into either series, such as an incongruous, uncharacteristic account of a Los Angeles carjacking and an account of a man named Dave, hang-gliding over a post-apocalyptic woodland.

Several chapters from the manuscript (primarily those featuring Dirk Gently) have been compiled and published in The Salmon of Doubt: Hitchhiking the Galaxy One Last Time. This book is largely composed of essays, anecdotes, and other non-fiction writing from Douglas Adams, and merely takes its name from - and includes sizable fragments of — the manuscript at the end of the book. The short stories "Young Zaphod Plays It Safe" (a short prequel to The Hitchhiker's Guide to the Galaxy focusing on the character of Zaphod Beeblebrox) and "The Private Life of Genghis Khan" are included, as well.

As yet, no one has attempted to finish the book; whether it ever receives the Edwin Drood treatment remains to be seen.

The story, such as it is, is cryptic and surreal even by Adamsian standards. It begins with Dirk Gently, the con artist / private detective last seen in The Long Dark Tea-Time of the Soul, being asked to investigate the disappearance of the back half of a woman's cat (the cat, strangely, is just fine, and seems not to have noticed that he's only mostly there). Shortly thereafter, Dirk begins to receive a series of enormous payments from an unseen client, although he's done nothing to earn it. Convinced that he has to do something to justify this, he follows a ginger-haired actor (fan speculation identifies him as Ford Prefect) onto a flight bound for Los Angeles. Dirk then meets a rhinoceros named Desmond on the back of a truck. The story is largely fragments, and consists of various chapters from various drafts that Adams wrote at different times and because of this, there's no specific point where the text breaks off mid-thought, the story just sort of stops at the end of a chapter.