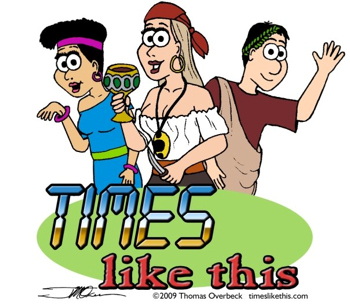 Taking the Space-Time Continuum, and ripping it a new hole.
"She doesn't waste time – She recycles it."
Advertisement:

is a webcomic created by Thomas Overbeck. It is, as the author

puts it succinctly, a webcomic "about time travel, and all the fun and interesting stuff involved with it. It's also about lampooning historical figures and speculating humorously on current celebrities."

The main character is Cassie Wells (whose name is doubly appropriate, all things considered), a young female genius who discovers the ability to travel through time. She works at a high-tech lab in the Dallas area specializing in Nanotechnology.

She has two friends helping her with her travels: Matt Gahan, an electronics expert whom Cassie befriended when he worked at the travel agency next door; and her best friend from school, Bethany Gibson.

She lives in the greater Dallas area along with husband Philip Webber, their new-born son Evan Theodore Webber, her pet dinosaur Mascus, and her MIRA-7 robot, named Nicki.

Her travels are "monitored" by the Federal government - but not how you'd expect. Agent Keith Scott has been assigned by the FBI to keep tabs on her - and help her keep her secret.