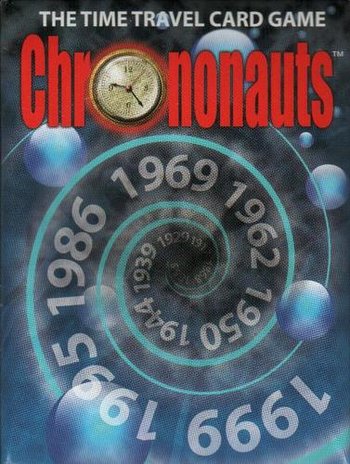 , created by Looney Labs (creators of Fluxx), is a card game about Time Travel.

You play as one of several folks from alternate timelines that have suddenly found that history as they know it is gone. Completely. Instead, they get thrown into a timeline completely different than the one they knew - namely, the one we actually saw in Real Life. So, you're a time traveler with the ability to alter time, bounce about as needed, and even fix Temporal Paradox. So, what do you want to do?

Chrononauts is a bit different in that there are three ways to win. You can have your character (you're given a unique character ID, hidden from all others at the start of the game) recreate their own timeline, at which point they go home. You can also have your character become an expert at preventing paradoxes, thereby being hired by the game's Time Police (symbolized by hand size). Finally, you can use your time machine to acquire stuff for some fabulously wealthy individual, and retire to whatever era is pleasant enough for you.

That said, there's also a Rocks Fall, Everyone Dies scenario - if there are at least thirteen unpatched paradoxes at the same time, the entire universe collapses. Good luck with all that.

There's also Early American Chrononauts that focuses purely on early US history; the two games can be combined to make what the developers call ÜberChrononauts. They also released a small expansion set called The Gore Years that focuses on more recent events, and can be added on to the base game or the über version, and another one called Lost Identities which adds more ID cards. In 2019, a crossover version with Star Trek was released called Chrono-Trek using the Star Trek timeline, characters and alternate universes as a basis for the game.