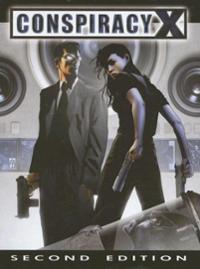 2nd Edition Corebook cover
Conspiracy X takes place in a world of dark secrets and hidden agendas where the only certainty is nothing is what it seems. The president might not be human, and the sign carrying paranoid on the street corner ranting about CIA mind control satellites may very well be right.

In other words, a world just like yours, if you could see beyond the lies.
— Conspiracy X Blurb
Advertisement:

Often called "The X-Files: The RPG" by fans, Conspiracy X presents a world superficially identical to our own, yet in the shadows lurks a vast multitude of paranormal conspiracies.

The players are agents of Aegis, a powerful secret society which has subverted numerous government agencies and major corporations, and whose mandate is to protect humanity from malevolent aliens by any means necessary. The threats to Aegis (and humanity) include no fewer than three distinct alien species, the Black Book (a rival conspiracy of humans who collaborate with the aliens), and innumerable supernatural threats. While the game's secret societies, monsters, and alien factions are well-defined, the setting is flexible enough for gamemasters to add whatever other conspiracies and mysteries might strike their fancy.

As a game, one of Conspiracy X's notable innovations was the "cell creation system". At the start of a campaign, the players create not only their characters (like every other RPG), but also their cell's secret base of operations. The base's facilities, equipment, vehicles, and staff are all bought with the Influence that each player character brings to the table, and the type of Influence (military, civilian, criminal, intelligence, etc) determine exactly what the players can spend it on. A cell of military specialists might have an armored outpost stocked with high-powered weapons and a fully-armed attack helicopter, while a cell with more scientific professions might have a private supercomputer, a legitimate hazmat lab, and a team of trained engineers in their base.

The first version of Conspiracy X was published by Eden Studios and used its own system, but the second edition was adapted for Eden's Unisystem, and at one point the setting was also tapped for a GURPS sourcebook.