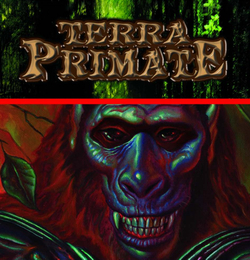 Terra Primate is a roleplaying game by Eden Studios Inc, the makers of the Unisystem.

Published in 2002, Terra Primate is similar to AFMBE in that it is an "open setting" RPG, relying on a key concept for GMs to build their own game worlds around. In contrast to All Flesh Must Be Eaten, which revolves around zombies, Terra Primate revolves around the concept of man interacting with intelligent apes — Planet of the Apes is a major inspiration to the game.

Unfortunately, this relatively niche concept was the line's downfall; unlike AFMBE, only the corebook was ever created for Terra Primate. It did, however, feature some sample Apeworlds.