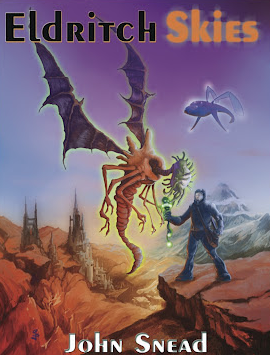 Everything H. P. Lovecraft ever wrote really happened. It was just the beginning.
Advertisement:

In the year 2030, humanity has not only become aware of the Cthulhu Mythos but also started taking tentative steps to make use of its secrets to better itself. Treaties and trade agreements have been established with the mi-go and the deep ones. Shortcuts through the space between spaces have opened ways to the stars and allowed various countries to establish extra-solar colonies. While Great Old One cults and bizarre sorcery still exist in the shadows, an officially licensed UN agency exists to keep them all at bay.

However, while humanity is not doomed, nor is it promised a bright future. The galaxy is littered with the ruins of earlier civilizations that reached this point and then fell to invaders, natural disaster or their own runaway technology. Hyperspace is filled with god-like creatures hungry for the psychic energy of material lifeforms. And if alien life is not inherently hostile, nor does it have any concern for humankind except as a means to further its own ends.

This roleplaying game styles itself "Lovecraftian science fiction" as opposed to "Lovecraftian horror," drawing on the more sober tone of stories such as The Shadow Out Of Time that depict the Mythos universe as less a place of blasphemous monstrosities and more one that's large, bizarre and uncaring of human concerns.