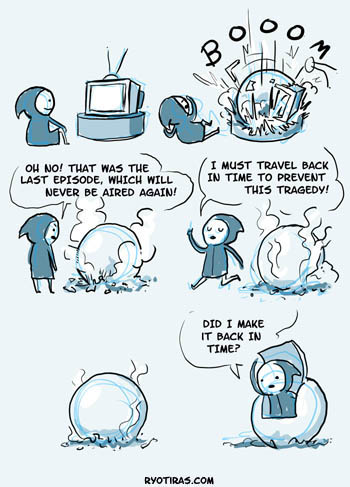 Next time, just wait for the DVD.
"One cannot damage history, because history cannot be changed. [holds up Clock of Eternity] I went back in time to steal this because history said it disappeared. And history said it disappeared because I went back to steal it. Past, present, future. It's all written in stone, my dear."
— Warp, Teen Titans (2003), "How Long Is Forever"
Advertisement:

Through Applied Phlebotinum, Functional Magic, or some other means, our heroes travel back to the past. In the past, they wind up being responsible for the very events that underpin their own "present." This creates a chicken-and-egg scenario, in which the looping sequence of events has no clear beginning. The result of breaking the zeroth law of Time Travel: do not cause the event you went back to prevent.

This is also the basic premise of how Time Travel would work, according to Albert Einstein. Simply put, even if it were possible to travel back in time, you would not be able to change any events in the past, because your future self would have already caused them to happen in the way that they did. No matter your intentions, everything that you did would only fulfill the past. The only thing that would change is your perception of the events. (Thus explaining Hitler's Time Travel Exemption Act.)

This trope is actually Older Than Feudalism, since, while time travel is a relatively new concept, prophecy (which is basically information time travel) is not, and Self-Fulfilling Prophecy is the earliest form of stable time loop.

There are two basic types of time loop: a Predestination Paradox, in which knowledge of events in the future, even attempts to evade them, ultimately causes those events to happen (Sorry Oedipus. And John Connor.) and the even more mind-squirming "bootstrap paradox"note from the classic Robert A. Heinlein short story, "By His Bootstraps" (also called the ontological paradox), in which the time loop allows for the existence of information or objects that have no origin. The classic hypothetical bootstrap paradox is to jump into the future, steal some wondrous gadget, come back to the original time, grab the patent on that gadget and start mass-producing them immediately. Eventually, they become so ubiquitous or so common that you, ten, twenty years younger (and thus from a time period where you aren't aware that you would go on to patent and mass-market them after returning to your present), show up and steal one. The simplest version is the one where the time machine itself is the product of the stable time loop — the character sees a version of himself pop into existence with a time machine, hand it to him, and press the button, only to be whisked into the past where he hands it to his past self and presses the buttonnote This exact example is also an Object Paradox, wherein the time machine has no past and no future outside the loop, no origin, and somehow never decays or suffers wear and tear. The paradox can be resolved as regards physical objects by noting that such a process would imply the spontaneous creation and subsequent elimination of mass-energy, which violates the 1st Law of Thermodynamics (a principle established 150 years ago to which no exceptions have ever been found).

A Time Travel-specific subtrope of the Chicken-and-Egg Paradox. Tricked Out Time is when you "change" the past on purpose to resemble this; Close-Enough Timeline is when you partially succeed but decide the end result will suffice. Time Loop Trap is when you use a time loop as a way to imprison someone or something. Compare You Already Changed the Past, which often results in this. A Wayback Trip usually implies this. If this occurs in a universe where you can Set Right What Once Went Wrong, you most likely have a Timey-Wimey Ball on your hands. See Retroactive Preparation for one way this can be exploited. For the Recursive Fiction variant of this, see Mutually Fictional.

Since many examples of this trope aren't revealed until late in the story, and the existence of a loop can itself be a Spoiler, consider yourself spoiler-warned.

This trope is not to be confused with "Groundhog Day" Loop.