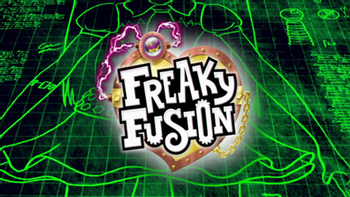 Sticking together, through any time or weather.
It's been 200 years since 1814, and school's Bite-Centennial anniversary! Connected to this, the ghouls are assigned to expound on their family scaritage in class. Things go well until we get to Frankie, who doesn't know if she really has a scaritage. We also meet the hybrid monsters: Neighthan Rot, Avea Trotter, Bonita Femur, and Sirena Von Boo (who, because of her part-ghost heritage, also became part of the cast for the next movie Haunted).
Advertisement:

Along with Robecca, the ghouls unlock Hexiciah Steam's secret lab under the school, where they accidentally find a time travel machine that takes them back to MH circa 1814. Here, Frankie finds the past versions of Victor "Sparky" Frankenstein (the man who made her parents and technically her grandfather) and Hexiciah Steam (Robecca's creator and one of MH's first professors). In Hexiciah's class, we learn past Victor is extremely gung-ho and sure of himself with regards to his science, yet in his zeal forgets the emotional aspect necessary for his work—and for a while has been attempting to learn how to create life. Later, Frankie finds Victor. Shocked by her creation, he relentlessly quizzes her on how she was made before she realizes she can't stay long. After Frankie assures him he'll know what to do, the ghouls return back through time—but the machine malfunctions and fuses them all together (save for Ghoulia). And Victor and Hexiciah follow everyone back.