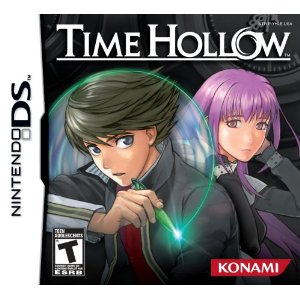 "Beyond the Hole is a Moment from the past. The Holes you open must be closed, or time won't start up again. The holder of the Pen must have the Time to use it. Once you've gotten the hang of the Pen, come and rescue us..."
Advertisement:

Time Hollow is a point and-click Adventure Game/Visual Novel for the Nintendo DS developed by Tenky and published by Konami. The player takes the role of Ethan Kairos, an Ordinary High-School Student living with his parents, starting on the evening before his seventeenth birthday. However, during the night, Ethan dreams that his parents are caught in a fire, and upon waking discovers that he lives with his uncle and his parents disappeared twelve years ago. He then inherits a Hollow Pen: an invisible pen that can create holes through time. With this, Ethan tries to find out what happened to his parents and stop it from occuring. However, a figure from the past is always one step ahead...