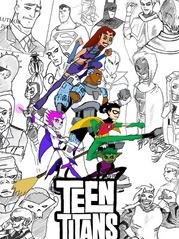 is a Teen Titans story on FanFiction.Net by Eduard Kassel

An Alternate Universe Fic, it diverges from canon when Raven is banished to Earth not as a teenager trained in her powers, but as a child who has only just come into her powers and has no control over them. Treated with disdain by humanity and forced to live on the streets, she eventually catches the interest of Slade, who takes her in and raises her as his daughter and apprentice. Years later, the newly formed Teen Titans find themselves facing the threat of the mysterious villainess known as Midnight...