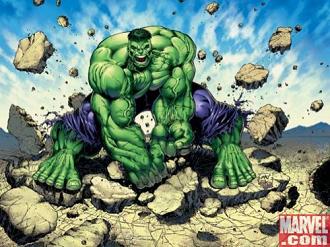 He can shatter anything with a single punch, but look at that awful technique!
"This is the dreaded Damien? He moves like an amateur! Wait... that fire could easily win him most fights, he can regenerate, and he's supposed to have super strength... he's never needed skill before! His fighting style is totally dependent on his powers!"
— Elliot, on Damien, El Goonish Shive
Advertisement:

A character who is Unskilled, but Strong lacks the refined technique of formal training but compensates in various ways through raw power. They may eat anti-tank missiles the way a glutton goes through an all-you-can-eat buffet. They may be so strong they kick tanks around like footballs or have the firepower to crush the US, China, and Russia in a conventional conflict. They may make a Bugatti Veyron look slow or waltz through a point-blank crossfire of Gatling guns with ease that makes an Agent envious. They may have really won the Superpower Lottery and have all of the above at their disposal. However it is, they are so very naturally talented they don't need skill. They tend to have the attitude that if brute force doesn't work, it's just because they didn't use enough of it, as well as that they will charge head-on, believing that their raw power alone will overwhelm anything that gets in their way.

When seen in a protagonist (triple that for The Big Guy), their lack of skill is typically only because it's the first episode and they've only just discovered their powers. The initial stages of the series, if not the series as a whole, will then focus on improving the protagonist's innate talents. It also gives the series a justification for why a complete newbie to whatever power they've uncovered is able to fight with or against people who have more experience, or why they can come along in training relatively quickly. One common type of this is the Super Prototype that the Ordinary High-School Student is Falling into the Cockpit of.

In an antagonist (triple that for The Brute), an Unskilled, but Strong character is commonly either the very first foe the protagonist faces or one of the last. In the former case, they're a Starter Villain and may be fond of Badass Boasts but prove all talk in the face of the much more skilled protagonist. In the latter, they provide a hurdle against which the protagonist must disprove the theory that Hard Work Hardly Works.

Compare Skilled, but Naive, Strong and Skilled, and Glass Cannon. Contrast Weak, but Skilled and Powerful, but Incompetent. Often pursues a Bigger Stick. Can also overlap with Brilliant, but Lazy, or Incompletely Trained (or both). This character is often the Goliath in David Versus Goliath. Characters with explicitly superhuman abilities can have this cured with Boxing Lessons for Superman. If they never get formal training, they may instead be Taught by Experience. If they barely or never improve at all, or even outright refuse to do any kind of training or get worse in their overall combat effectiveness, then this will result in Apathy Killed the Cat. In Arrogant God vs. Raging Monster, the second tends to be this. In games, this character is probably a Vanilla Unit if they're playable.

Since Iris is actually a black dragon, she is incredibly powerful but not used to having a human form and lacking in technique.

Since Iris is actually a black dragon, she is incredibly powerful but not used to having a human form and lacking in technique.