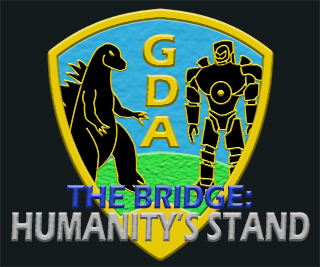 "The GDF has never had enough power to go on the offensive. We've always been stuck playing a defensive game, reacting to Kaiju attacks and hoping we don't get overrun. But we can't do that anymore."
-Stacker Pentecost
Advertisement:

In the days following the Terran Defenders-Mutations battle at Solgell island that resulted in the leaders of the two factions being transported to another dimension, Human and Kaiju alike are living in a state of tension and uncertainty. However, the leaders of humanity's Global Defense Force realize that the aftermath of this tragedy contains the makings of an incredible opportunity: While the benevolent Terran Defenders are still organized, now under the leadership of Gamera, the violent Mutations are scattered and leaderless. Rallying their forces and forming an alliance with the Terran Defenders, the GDF sets forth to accomplish what was once thought impossible: hunt down and exterminate the remaining Mutations, end the countless Kaiju wars once and for all, and secure a lasting peace on Earth.

They're not the only ones making their move, however, as shadowy threats from Terra's ancient past begin to resurface...

The Bridge: Humanity's Stand is a Crossover fanfic written by BlazingPhoenix17

. It's a Spinoff of The Bridge that shows what's happening on Earth whilst Godzilla and the rest of The Bridge's cast are away in Equestria. The original version was canceled after 28 chapters, readable Here