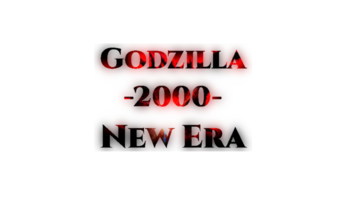 Wild and strong, it can't be contained!,
Never bound, nor ever chained
Death is not destruction’s end,
So Gojira will live again!
Advertisement:

In 1954, a monster of Odo Island legend turned Tokyo into a holocaust of flames and irradiated rubble. It was thought destroyed at great cost. In 1984, an even larger second Godzilla leveled much of that rebuilt city and doubled the first's horrific death toll. That creature went on to rampage and battle other titanic beasts for another decade before meeting its end through a nuclear meltdown in 1995. But just as some like G-Force started to celebrate that the age of monsters finally was at an end and a new era for mankind's dominion was at hand, many on Odo Island were adamant the immortal sea dragon of destruction could never die for good. Sure enough, a third Godzilla was briefly sighted retreating into the ocean after the demise of the second. Years later, with the eve of the year 2000 in sight, strange happenings begin to occur. Seismic activity on the sea floor, storms in a region of the sea known since the 1500s for strange occurrences, and a research vessels found with all of the electronics and crew missing. And sightings off the coast of Odo Island confirming the worst fears of some at G-Force. The next Godzilla had returned.

And at the heart of it all a father and daughter duo, Yuji and Io Shinoda, are trying to uncover the mysteries of what is going on. Photographer Yuki Ichinose joins the pair as they navigate across Japan and meet both faces from Yuji's past and G-Force's operations. Is this new Godzilla the adult form of the friendly infant that Io befriended as a little girl? If it is "Junior", is he still the docile youth he once was now as a living titan? Why did Godzilla only now become active again? And how might the mythic legends of Yuji's homeland of Odo help a man of science find peace with himself?

Godzilla: New Era is a fanfiction rewrite of Godzilla 2000 written by Tarbtano

and proofread by Faith-Wolff and Lance Omikron. It is set in the "Amalgam'verse" continuity and technically serves as a prequel to The Bridge, showing what happened in the world of Terra the kaiju hailed from decades before the main events of that crossover. In essence, it's a retelling of the continuity reboot of Godzilla 2000, set as a continuation of the "Heisei Saga" of Godzilla films and the "Rebirth of Mothra" trilogy; meaning events and persons in the prior sagas feature in this retelling alongside the 2000 cast.

The fanfic is currently in progress (latest chapter posted as of 2/25/2022), marked as incomplete currently with twenty chapters.

on Fimfiction and here