Film / Ebirah, Horror of the Deep 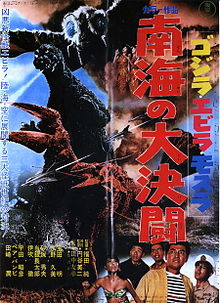 "Listen, I've done some crazy things in my life, but I've never stuck my head inside of a hornet's nest!"
— Yoshimura to Yata, in the Titan Productions dub of the Walter-Reade TV version.
Advertisement:

Number seven in the long running Godzilla series and more well known under the title Godzilla vs the Sea Monster, this film started life as a King Kong project until the proposal was rejected in favor of King Kong Escapes. Not wanting to put the script or monster costumes to waste, the film switched stars to Godzilla. Known in Japan as Gojira, Ebira, Mosura Nankai no Daikettō.

The film begins with a young man, Yata, becoming lost at sea. His brother Ryota, certain that he's still alive out there sets out on a stolen yacht with two friends and a bank robber to search for him. On their excursion, they narrowly avoid destruction at the hands of Ebirah, a colossal crustacean guarding an island base home to a terrorist syndicate called the Red Bamboo. Using a special chemical, the Red Bamboo are able to repel their ships from Ebirah's wrath and have enslaved the natives of nearby Infant Island to produce the stuff. Evading capture, Ryota and crew meet a young native woman Dayo, who brings them to a cave on the island where Godzilla is currently slumbering. A plan is hatched to wake Godzilla with a lightning rod in order to get rid of Ebirah and the Red Bamboo and the slaves to escape and summon Mothra in order to rescue them.

Followed by Son of Godzilla.