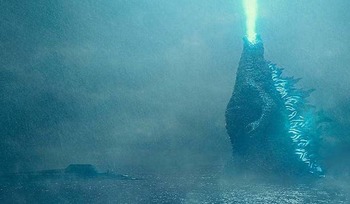 To the right, Godzilla; to the left, the USS Scorpion, an Ohio-class nuclear submarine. Not shown: How the heck Godzilla is able to stand upright in the middle of the open ocean.
"Okay, so just seconds ago [Gipsy Danger] rose up out of the water completely submerged, but now [it is] standing and the water comes up to [its] knees. So what position must Gipsy Danger have been in underwater in order to pull off that rise-up-from-the-deep move? Like, lying flat on the floor of the ocean, right?"
— CinemaSins, Discussing this trope in Pacific Rim, and what it would take to pull off.
Advertisement:

In a wide range of media, it is common to see characters standing upright and knee-to-chest-deep in water or other liquid substances that logically should be well over their heads and/or in which they were previously shown completely submerged.

This trope is particularly common in kaiju movies and giant monster-related media, and doesn't just apply to the open ocean, either: even lakes, bays, and continental shelfs — where the water is relatively shallow — can have depths exceeding the height of giant monsters. In tokusatsu films, this is done both as a means of practicality — to avoid risking the people wearing the monster costumes drowning in the often heavy and cumbersome suits — and to make the giant monsters and robots seem more imposing by comparison, even if it logically makes no sense. In animation and films where the action is filmed using CGI instead of suits, this is generally done as an homage to classic giant monster movies.

This trope is not exclusive to giant monsters, and has appeared in a range of other media as well. Contrast the subtrope of High-Dive Hijinks where a character dives into a shallow pool of water — for example, a wading pool — and disappears into it as though it's deep. Superficially similar to, but in many ways the opposite of, Stop Drowning and Stand Up. A subtrope of Sci-Fi Writers Have No Sense of Scale.

Just how deep is that ocean?

Despite the ocean seemingly being deep enough to conceal both the entirity of a Kaiju and a Humongous Mecha, it doesn't even reach the knees of either.

Just how deep is that ocean?

Despite the ocean seemingly being deep enough to conceal both the entirity of a Kaiju and a Humongous Mecha, it doesn't even reach the knees of either.