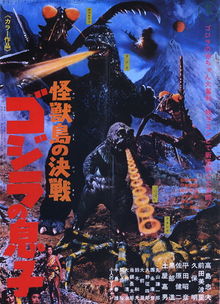 "Godzilla and his youngster, the Gimantises, and now a Spiga! Huh, it's an island of monsters!"
— Goro Maki, in the Titan Productions dub of the Walter-Reade TV version.
Advertisement:

Titled Kaijū-tō no Kessen Gojira no Musuko (Monster Island's Decisive Battle: Godzilla's Son) in Japan, Son of Godzilla is the eighth film in the Godzilla franchise, notable for the introduction of Minya and further Godzilla development into a hero. At least in the English-speaking fandom, this received a mixed reaction. Minya became one of the least-loved monsters in the franchise, and the Lighter and Softer direction isn't exactly welcomed by some, but the movie itself isn't bad. It garnered a 71% at Rotten Tomatoes, and the scenes between Godzilla and Minya can be heartwarming.

The testing of a weather control system on Sollgel Island is hampered by a nosy reporter and the discovery of large mantises. A strange cry from the island makes things go further awry, exploding the weather balloon and spreading radiation that mutates the mantises into Kamacuras which dig up an egg. They are about to make the baby Godzilla into their meal when the King of the Monsters himself shows up, offing the two Kamacuras and adopting the baby called Minya as his son. The first day of parenting starts off awkwardly, with Minya being a bit too cowardly and Godzilla not having the patience to deal with children. When Minya defends a woman living on the island from the last Kamacuras, the Giant Spider Kumonga is awakened and Godzilla must discover his Papa Wolf nature before his son is dissected...

Followed by Destroy All Monsters in terms of production whereas Godzilla vs. Hedorah resumes Showa Godzilla's storyline.