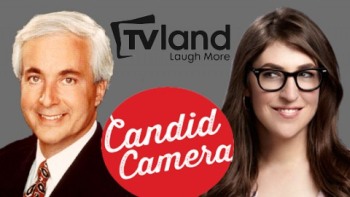 Smile! You're on Candid Camera on TV Tropes!

Smile, you're on Candid Camera!

The original show began radio as The Candid Microphone in 1947 and was created and produced by Allen Funt. After a few theatrical live action shorts under that title, the TV version premiered in 1948 and has ran off and on ever since. It used hidden cameras to film ordinary people in unusual situations, such as a desk with drawers that pop open when one is closed. When the joke was revealed, the victims would be greeted with the catchphrase "Smile, you're on Candid Camera." Celebrities were regularly featured as well, either as victims of or as participants in a prank. Participants in gags included Woody Allen, Muhammad Ali and Buster Keaton.

It is, needless to say, the Trope Namer and Trope Codifier for the Candid Camera Prank.

There was a poorly received syndicated version in the 1990s starring Dom De Luise. Another incarnation starred Allen's son Peter Funt and Suzanne Sommers, and ran from 1998 until 2000 on CBS, then on PAX until 2004 where Sommers was replaced by Dina Eastwood. Another revival began on TV Land in August 2014, retaining Peter Funt, but adding Mayim Bialik as co-host. Some of the pranks in the 2014 version are played by Peter's son, Danny.