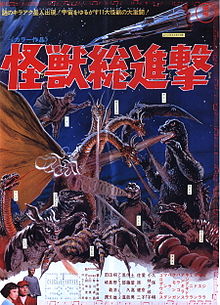 Time is running out for the human race!

"Uh, about all I can tell you now, could be looked upon as ancient history. When the monsters first appeared, they meant to destroy the Earth."
~ Dr. Yoshida, in Titan Productions' dub of the film.

The ninth Godzilla film and originally set to be a Grand Finale (though remains this chronologically for the original series). The last time Tomoyuki Tanaka, Ishiro Honda, Eiji Tsuburaya, and Akira Ifukube collaborated together on the franchise, and entitled Kaijū Sōshingeki ("Attack of the Marching Monsters").

The year is 1999, where the world has corralled all the world's monsters into a heavily secure island base in the Ogasawara archipelago called Monsterland and a new Moonbase is being established with the brand new rocket ship Moonlight SY-3. However, things go awry when Monsterland is suddenly gassed by aliens and both the monsters and humans are brought under the control of a group of space women known as Kilaaks. They've made the Monster Island crew into henchmen and have sent the monsters around the world with Godzilla attacking New York, Rodan to Moscow, Gorosaurus to Paris, and Mothra to Beijing. It is up to the crew of the Moonlight SY-3 to sabotage the Kilaak control device, while the monster attacks intensify and the Kilaaks plot to make things more comfortable for them by raising the temperatures. Upon their success, the monsters rally to attack the Kilaak base at Mount Fuji, but the Kilaaks pull another card from their sleeves: King Ghidorah, leading to a climactic showdown for Earth.

Canonically, this is the final film of the Showa Godzilla storyline, but it's followed by All Monsters Attack in terms of production.