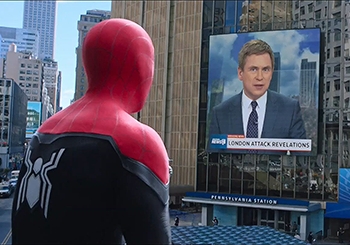 Pat Kiernan in his 4th MCU cameonote 9th if you count the TV series and 2ndSpider-Man cameonote after The Amazing Spider-Man 2.
"Andrew Marr, the quintessential face of 'capitalist realism', makes a cameo as himself... portraying himself as totally failing to pick up on what's happening. He stands in front of the camera, solemnly discussing the personalities at Number 10, while failing to notice that a massive, murderous, warmongering criminal conspiracy is unfolding before his blinkered eyes. Not the first time."
— Jack Graham

on Doctor Who, "Aliens of London"

On occasion, a film or TV show will feature a news segment discussing events happening within the show. The fictional scene will star an actual newscaster who delivers that sort of segment in Real Life.

In Sports Stories, this can take the specialized form of a Sportscaster Cameo.

Related to Practical Voice-Over, where the voices are frequently recognizable newscasters. Sometimes achieved in dramatizations by use of Stock Footage.

Sister Trope to Leno Device, which uses a talk show or other nonfiction entertainment, rather than a straight news program. Subtrope of As Himself and The Cameo. Compare Phony Newscast. Not to be confused with Kent Brockman News, though it can certainly take that role.

Fiona Bruce and Nick Ross make their appearance in a Crimewatch UK segment when the Queen's handbag is reported to be stolen by one of the Baddies.

Fiona Bruce and Nick Ross make their appearance in a Crimewatch UK segment when the Queen's handbag is reported to be stolen by one of the Baddies.