Film / The Man Who Sued God 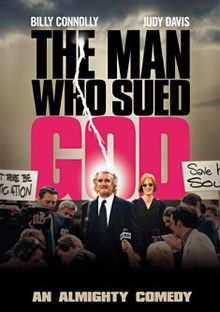 The Man Who Sued God is a 2001 Australian film starring Scottish funnyman Billy Connolly, who plays fisherman and retired lawyer Steve Meyers. His wife has left him for the owner of the caravan park she lives in and is thinking of leaving with their daughter. This suits Steve just fine as he gets to spend his days on his boat with his dog, until lightning destroys it. When the Insurance companies refuse to pay on the basis of it being an act of god, Steve contemplates legal action. His local church gives him the idea to sue God instead, holding the Insurance agencies responsible for using God as a legal loophole.

This attracts the attention of news writer Anna Redmond (Judy Davis) who attempts to guide Steve through the legal minefield as well as the Media Circus. During the trial the two begin a relationship.

The Man Who Sued God has examples of: