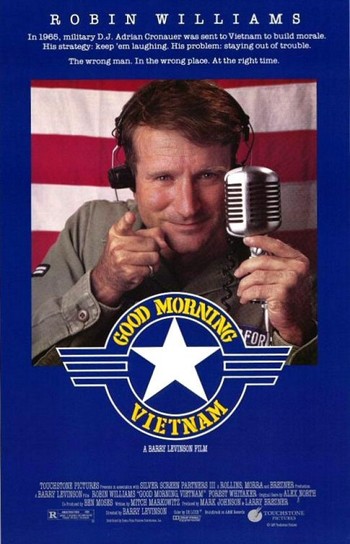 "This is not a test, this is ROCK AND ROLL!"
Advertisement:

A 1987 comedy-drama directed by Barry Levinson and starring Robin Williams.

The film is Very Loosely Based on a True Story of Armed Forces Radio DJ Adrian Cronauer (Williams), assigned to host radio programs for the Army during The Vietnam War. Cronauer is brash, off-color and sexually offensive — and the troops can't get enough of him! He meddles in the affairs of the Army, annoys his superiors to no end, and makes friends with a young Vietnamese boy and his sister while teaching their English class.

Robin Williams got nominated for an Academy Award (and won a Golden Globe) for Best Actor for this film. The supporting cast includes Forest Whitaker, Bruno Kirby, Robert Wuhl, and J. T. Walsh.