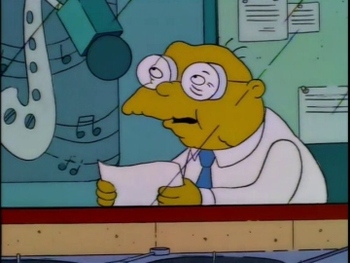 KJAZZ: 152 Americans can't be wrong!
"This is Moleman in the Morning, good Moleman to you. Today, part four of our series on the agonizing pain in which I live every daaaay."
— The Simpsons, "'Round Springfield"
Advertisement:

Not every radio or television station is created equal. While many often aim to entertain mainstream audiences or cater to the Lowest Common Denominator, others may go in the other direction, aiming to serve a more narrow or intellectual audience.

Public radio and television, especially the U.S. NPR and PBS networks, tend to delve into more serious topics (such as education, politics, science, fine arts, classical and/or jazz music, and the occasional pledge drive) than the average commercial broadcaster. Similarly, the "soft adult contemporary" radio format tries to be inoffensive in its content to appeal to workplaces and an older demographic, focusing primarily on "soft rock" and ballads, new and old (although the format has since evolved to be more inclusive to music that is upbeat yet "safe").

Similarly, television channels and programs devoted to public affairs (such as coverage of governmental sessions and other political events) are similarly intended to be a public record rather than exciting entertainment by design (that is unless a protester or quick-witted politician livens things up, or they're covering an informal event such as the White House Correspondents' Dinner). Some public access shows may also fall into this category if they are not deliberately aiming for that kitschy, No Budget feel.

It's no surprise that these outlets are often a target for satire, stereotyping them as having little to no viewers due to their reputation or quality, attempting to stay relevant with a Ratings Stunt or two, outright begging for money because they have No Budget, or portraying a character's interest in such programs as an example of their intellectualism.

See also Biting-the-Hand Humor if the show claims this of its own network.