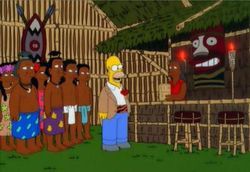 Homer runs off to a South Pacific island to escape the wrath of PBS after promising them $10,000 during one of their pledge drives.