Recap / The Simpsons S6E22 "'Round Springfield" 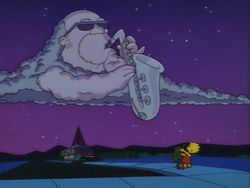 In this partial Very Special Episode, Lisa discovers that her friend and jazz mentor, Bleeding Gums Murphy, is in the hospital, and when he dies on the night of her recital, Lisa works to keep the musician's memory alive. Meanwhile, Bart comes down with appendicitis from eating Krusty the Clown's new cereal, which comes with a jagged metal "O", and sues the clown for personal harm.