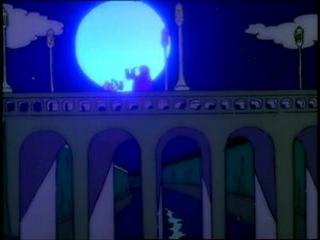 I got a bratty brother, he bugs me every day.
And this morning, my own mother gave my last cupcake away.
My dad acts like he belongs, he belongs in the zoo.
I'm the saddest kid in Grade #2.
— Lisa Simpson
Advertisement:

Lately, Lisa is feeling depressed about life, but doesn't want to talk about it as no one truly understands what she's going through, so Lisa runs away and befriends "Bleeding Gums" Murphy (Ron Taylor), a homeless, black saxophonist.

Meanwhile, Bart repeatedly beats Homer at a two-player boxing video game. Homer really wants to beat Bart at the game, so he gets help from Howard (Susan Blu), a video game master, at the local arcade.