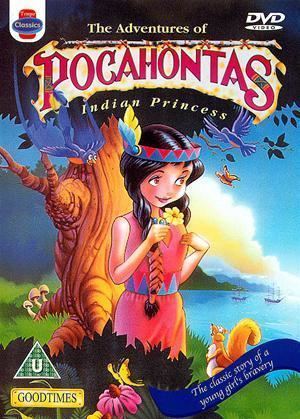 The Adventures of Pocahontas: Indian Princess is a Direct to Video animated film produced by Jetlag Productions and GoodTimes Entertainment in 1994. It was originally released as simply Pocahontas, but, as you can tell, the title was later expanded.
Advertisement:

The plot is much what you'd expect. Pocahontas is a kind-hearted Noble Savage. When English colonists show up, she is scared but curious. A young hothead named Tonkana insists they attack the "palefaces" right away, but Chief Powhatan says they should give peace a chance first. Meanwhile, Captain John Smith also wishes for peace, but his second-in-command, Mr. Barlow, doesn't understand why they should bother with such niceties when they can overwhelm the natives by force. Would you believe that Pocahontas brings peace? Perhaps by preventing the execution of one John Smith?

Compared to Disney's Pocahontas, this film sticks a little closer to history, albeit a very sanitized, fairy-tale version of it. If you want a taste of what the Disney version would have been like had Jeffrey Katzenberg not decided to turn it into Oscar Bait, this movie probably isn't too far off. Well, aside from the quality of the animation, of course.