Joke of the Butt 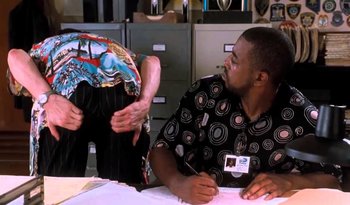 "Excuse me! I'd like to ass you a few questions."
Advertisement:

People have various configurations of equipment in the fronts of their crotches, but everybody has the same naughty bits in the rear ends. Yes, we're talking about bums. Everybody has a bottom, through which they fart and poop. As such, the rear end has been a subject of humour since time immemorial. People just find arses funny. Indeed, as this very page demonstrates, there are many, many terms for the derriere, most of which are pretty funny in their own right.

Supertrope to Ass Shove, Butt Biter, Butt Cannon, Butt Sticker, Cheek Copy, Comedic Spanking, Pain to the Ass, Butt Brand, Rump Roast, and Toasted Buns. May overlap with Shaking the Rump and Toilet Humour. See also Uranus Is Showing. Can be seen as the backside version of Gag Boobs. Stuffy Old Songs About the Buttocks often enter this, even if unintentionally. Despite the name, this has nothing to do with Butt-Monkey or buttes

; while a geologist might make a butte joke, it would only qualify as this trope if it's a pun on butte/butt, or if the butte is shaped like a butt.