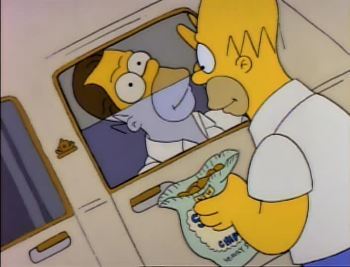 Homer: Since I'm the one you kept, that must mean you really love me.
Abe: Hmm. Interesting theory...

Homer is told by Grampa about the existence of a half-brother (the product of a one-night stand Grampa had with a dunk-tank carny-cum-prostitute) called Herbert Powell (voiced by Danny DeVito), a Detroit car tycoon who recruits Homer to create a car "for the common man".

Abe Simpson and Jasper Beardley loudly complain to a theater employee about the excessive sex and violence on the McBain movie they saw. The employee taunts Grampa about him having a heart attack, which does actually happen. Meanwhile, at the Simpson home, the family attempts to have a peaceful dinner when they receive a call about Abe's predicament.

Realizing his mortality, Grampa decides to tell Homer about a dark family secret: Years ago, he went to a county fair, where he had a fling with a dunk-tank girl, who "loved for money". One year later, the girl returned... with a baby, who was sent to the Shelbyville orphanage. After marrying Mona and having Homer, the two of them resolve to never tell him the truth. The Simpsons then travel to Shelbyville where Homer finds out that the orphanage has long been torn down and replaced by a gas station... as well as relocated across the street. The orphanage director initially refuses to disclose confidential information to Homer, but then relents, telling him that the boy, Herbert, was adopted by the Powell family of Detroit.

Herbert Powell is the founder and owner of Powell Motors, but in spite of his riches, he's been unhappy about not knowing about his origins. He is then overjoyed by getting a call from his half-brother, and invites him to Detroit. Powell Motors are at the same time facing difficulties trying to keep up with Japanese imports, a competition the company's haughty management is oblivious about. Seeing Homer as an "average American", Herb gives him the task to design a new car for his company. Meanwhile, the Simpson kids have a good time with their rich and genial uncle, even though Marge thinks he might spoil them.

As the company expresses little support for Homer's crazy ideas, Herb gives him complete creative control over the product, which ends up becoming "The Homer", an extremely ugly and expensive car, with an $82,000 (nearly $176,000 in 2022 dollars) price tag (consider that, in 1991, few if any luxury cars sold for over $70-75),000). The ensuing PR chaos ends up with Powell Motors in bankruptcy (its assets being taken over by Komatsu Motors) and with Herbert losing everything he had, angrily telling Homer that his life was good until he knew he was a Simpson, an opinion shared by Lisa. Immediately after, Abe arrives in a taxi to see Herb, only to make a hasty retreat. On the way home, Bart compliments Homer for his car.

"Oh Brother, Where Art Thou?" contains examples of:

Bart's right use of "bastard"

Bart calls Herb a bastard, using the fact that he was born out of a wedlock as a valid point of saying the word. Even Homer can't disagree with that.

Example of:
Kid Has a Point

Bart's right use of "bastard"

Bart calls Herb a bastard, using the fact that he was born out of a wedlock as a valid point of saying the word. Even Homer can't disagree with that.