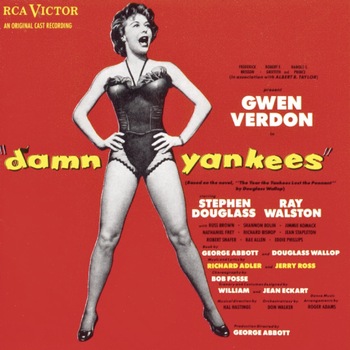 "So what the heck's the use of cryin'?
Why should we curse?
We've gotta get better
'Cause we can't get worse!"
— "Heart"
Advertisement:

Damn Yankees is a 1955 musical comedy with a book by George Abbott and Douglass Wallop (based on Wallop's novel The Year the Yankees Lost the Pennant) and music and lyrics from the team of Richard Adler and Jerry Ross (who also scored The Pajama Game together).

The plot is a retelling of the classic Faust legend set in 1950s Washington, D.C. It begins with the forty-something, baseball-obsessed Joe Boyd at home one evening, watching his beloved Washington Senators lose to the hated New York Yankees (yet again) on television while ignoring his wife Meg. When she eventually retires and he continues reflecting on the Senators, a mysterious gentleman suddenly appears to him, introducing himself as Applegate. Applegate offers Joe the fulfillment of his dreams: not only to have his favorite Senators win the pennant, but to lead them to the championship himself. Joe agrees, but only after negotiating an "escape clause" giving him the option to change his mind by September 24, near the end of the baseball season. After penning a goodbye note for his wife, Joe leaves his house suddenly twenty years younger.

The hapless Senators are still cursing their losing streak when Applegate introduces them to his young protegé, Joe Hardy, and persuades them to let him practice. They are astounded by his batting and fielding power. Their manager, Benny Van Buren, remains mystified about Joe's background, but signs him up anyway. He is dubbed "Shoeless Joe from Hannibal, Mo." by reporter Gloria Thorpe, and his fame and career seem assured.

Not content with being a successful baseball player, Joe grows homesick and decides to rent a room at his own house. This infuriates Applegate, who absolutely distrusts domesticity and calls in his top home-wrecker, Lola, to seduce Joe with what she calls "the standard vampire treatment." But Joe prefers the company of Meg, who hardly recognizes him as her lost husband.

Applegate plots to spoil Joe's career by scandal, and spreads through Gloria a rumor that "Joe Hardy," whom nobody in Hannibal seems to know, might actually be a Mexican League player who took a bribe to throw a game. The Commissioner calls for a hearing, and a celebration being held in Joe's honor is interrupted. Joe will be unable to play until he clears himself.

As the hearings drag on through the second-to-last day of the season, Joe is close to exercising his escape clause and thereby redeeming his soul, when Meg and her friends rush into court and testify that they knew Joe Hardy as a boy in his hometown. Lola, having fallen out of Applegate's favor, comforts the vindicated but dejected Joe, and confides to him that she's as much of a lost soul as he is now.

The next day, Washington is leading New York four to three. Applegate, more determined than ever to make Joe lose, uses his powers to turn Joe back into his old self while he is racing to catch a ball in the outfield. Joe miraculously manages to catch the ball, securing victory for the Senators, but as the champions celebrate, Joe Hardy is nowhere to be found. He is, of course, Joe Boyd once more, and free to return to his wife's lonely arms. As Joe and Meg embrace and sing, Applegate appears again, promising Joe forgiveness and offering him a second chance to be a baseball hero—this time to help the Senators win the World Series—but his pleas fall on deaf ears.

Adapted into a 1958 Warner Bros. film, directed by George Abbott and Stanley Donen and starring Tab Hunter as Joe Hardy. It differs slightly from the plot of the original Broadway production but keeps choreographer Bob Fosse and most of the original cast, including Gwen Verdon as Lola, Ray Walston as Applegate, Robert Shafer as Joe Boyd, Shannon Bolin as Meg, Russ Brown as Van Buren, and Rae Allen as Gloria.