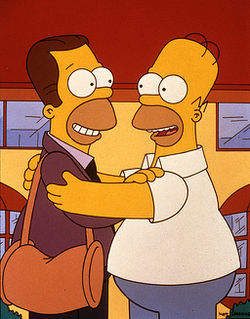 "Homer, I bought you the damn chair!"
Advertisement:

In this sequel to "Oh Brother, Where Art Thou", Herbert Powell, Homer's once-wealthy half-brother, is now homeless and searching for the next new idea to take him back to the top — and all he needs is Homer's $2,000 prize money he got at a (rigged) award show and a place to stay (the Simpsons' house).