Music / On Every Street 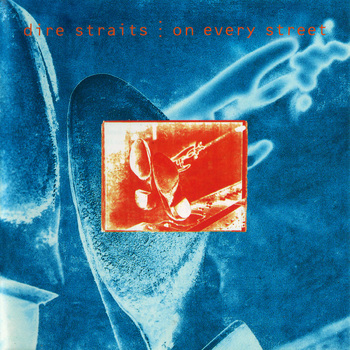 "There's gotta be a record of you someplace..."
Advertisement:

On Every Street, released in 1991, is the sixth and final album by British roots rock band Dire Straits. Released six years after their massively successful and just-as-massively acclaimed Brothers in Arms, the album wasn't exactly one that came about under amicable terms. Frontman Mark Knopfler had spent much of the interim working on film soundtracks and other side projects, with Dire Straits themselves having only occasionally regrouped for brief one-off performances before disbanding in 1988. Vertigo Records, having gotten fed up with the lack of a follow-up to Brothers in Arms, strongarmed Knopfler into reforming Dire Straits for another album at the start of 1991, with Knopfler and bass player John Isley returning alongside keyboardist Alan Clark, keyboardist & guitarist Guy Fletcher, and saxophonist Chris White, accompanied by a number of session musicians.

The end result was a much more melancholic affair compared to Brothers in Arms, crafting a mix of Communiqué's laid-back sound and Love Over Gold's tone, atmosphere, and density, punctuated by only a sparse handful of uptempo tracks, a sharp contrast with its jauntier 1985 predecessor. The album was another commercial success for Dire Straits, topping the albums charts in the UK, Australia, Austria, France, Italy, Norway, Sweden, and Switzerland, in addition to peaking at No. 12 on the Billboard 200. The album was also eventually certified diamond in France, quadruple-platinum in Spain and Switzerland, double-platinum in the UK, Canada, Australia, Latvia, and Platinum in the United States, Austria, Finland, Germany, the Netherlands, and New Zealand.

The album was also supported by a world tour spanning from 1991 to the end of 1992. According to band manager Ed Bicknell, the tour was an unpleasant experience, marred by souring personal relationships between band members. Mark Knopfler made the decision to dissolve Dire Straits for the second and final time in 1995, shifting focus to his solo work and leaving behind a band that ended as tensely as it began. Knopfler would remain active in the music scene via his solo career and is still active to this day.

On Every Street was supported by six singles: "Calling Elvis", "Heavy Fuel", "On Every Street", "The Bug", "You and Your Friend", and "Ticket to Heaven".

In an unlikely move, two tracks were later hits for Country Music artists: John Anderson with "When It Comes to You" in 1992, and Mary Chapin Carpenter with her own version of "The Bug" a year later.

If you wanna trope cool, you gotta trope on heavy heavy fuel: