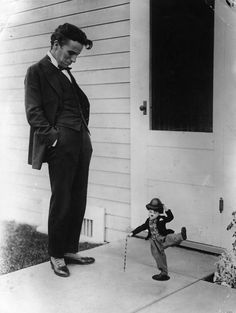 The original and his imitation.
Advertisement:

As one of the most universally recognizable people of all time, Charlie Chaplin has been part of popular culture for over a hundred years now. Since he first appeared on screen in 1914, countless media references have been made to his "Little Tramp" character. Usually the shout-outs consist of one or more of these elements:

Examples can be found in: