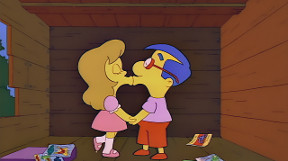 Bart's friendship with Milhouse is strained when Milhouse falls for a new girl in school. Meanwhile, Marge orders subliminal weight loss cassette tapes for Homer, but ends up getting vocabulary builder tapes that makes Homer Sophisticated as Hell.

Example of:
Raiders of the Lost Parody