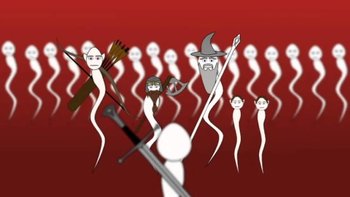 "Here we see how Fortress Ovum is besieged by countless little warriors."
—The holographic doctor, Star Trek: Voyager, "Someone to Watch Over Me"
Advertisement:

This trope is, essentially, when sperm cells are anthropomorphized. Given that humans are ultimately the product of the two gametes which combined to form the zygote, it's quite easy to imagine these cells as fully sentient, human-like beings in the way they get to their target, since with the magic of genetic variation, every cell that has a chance at making someone has its own genetic quirks, comparable to actual humans. Quite often, the sperm will have attributes like facial features or personality similar to either the man they're "living" in or the man's child they will end up conceiving. They will treat conception like a big event, often a race, with the egg as the "prize".

On the subject of the egg, it is rarely anthropomorphized in the same way, possibly because ova do not move in the same way sperm do, but on the rare cases it is anthropomorphized, it will be a female, just as the sperm are nearly always portrayed as male (although the sperm might be portrayed as female if carries the X chromosomes to conceive a girl).

Another weird point is that the semen they're supposed to live in is often not visible, possibly so that the living sperm can be seen clearly, not to mention the fact that physical depictions of semen are more often than not considered Not Safe for Work.

Conception is usually portrayed as the sperm forcing its way into the egg or just sitting next to the egg, and what happens to the other sperm cells is either they get disappointed, they just disappear, they die, or it's not touched upon. It's actually much more complex in Real Life, with the egg outright walling itself off from further sperm cells after fertilization, while the cells that didn't make it end up dying; even getting to the egg is a bigger hassle than popularly portrayed, as many cells die along the way due to the high acidity of a woman's... inner sanctum. The possibility of fraternal twins or tripletsnote which can only come about when there is more than one egg cell present isn't often mentioned either, which interestingly enough could be one way of reconciling this biological Plot Hole. Of course, don't expect any of this to be touched upon in most instances of this trope, as real-life complexities don't exactly make for a cohesive one-off segment in a narrative.

A variation is when a person tells another person about "when you were a sperm" or mentions "when I was a sperm" or talks about "having been the fastest sperm".

This trope is often used to either teach kids about "the birds and the bees" or as Vulgar Humour. Compare Anthropomorphic Food, Living Toys, Animate Inanimate Object, Egg Folk and Talking Poo for other anthropomorphic things, and I Call Him "Mr. Happy" for more realistic personification that has to do with male privates. Not Truth in Television of course, but for centuries, it was thought to be. Sperm cells were thought to contain "homunculi", i.e. tiny humans who developed in the woman's body.

Some talking sperm sing about getting to the egg to conceive a baby.

Some talking sperm sing about getting to the egg to conceive a baby.