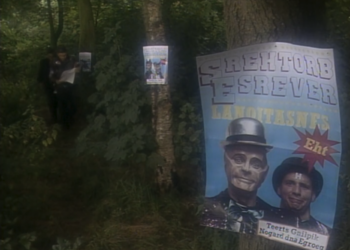 Rimmer takes Kryten out in Starbug 1 for his piloting test. While answering recognition questions, they wind up traveling through a time hole (which Rimmer is initially oblivious to). They crash-land on a planet which appears similar to Earth. As they reach a roadside they notice a sign which says "Nodnol, 871 selim". Although Rimmer is confused, Kryten correctly states that the sign (when read backwards) actually reads "London, 178 miles", and that they're on a backwards Earth.

Kryten and Rimmer are initially disgusted with this "backwards" world. Here, people take money from buskers' hats, and cafes are populated by customers who spit tea back into teacups and messily disgorge chocolate éclairs. Newspapers report events that have yet to happen (''"Three brought to life in a bank raid in a South London bank tomorrow"') , and advertise job vacancies that offer good demotion prospects. Rimmer and Kryten quickly discover that they can use their forwardness to their advantage, however, starring in an act called "srehtorB esreveR lanoitasneS ehT" ("The Sensational Reverse Brothers").

Meanwhile, Lister and Cat have been flying around in Starbug 2 for the past three weeks searching for them (with the Cat wanting to give up searching so he can focus on perming his leg hairs). They come across the same "time hole" that Starbug 1 did and, despite Cat's reservations (i.e. it's the wrong colour timehole for his costume), go through it. They close in on Starbug 1 using a homing device and land near the lake where it crash-landed. Upon exiting Starbug 2, Lister complains of feeling some pain — he suddenly has a black eye and his ribs feel like they've been cracked.

Lister and Cat eventually track down Kryten and Rimmer at the club where they attract wide audiences, whereupon Lister finally discovers that everything is backwards, after initially thinking they had landed in Bulgaria.

As it turns out, Kryten and Rimmer are quite content on this planet. Lister tries to convince them to come back, but they intend to stay. The club owner then fires them for starting a fight... despite Kryten noting that they have not started any fight. At the same time, a man takes offence to Lister and Cat "uneating" his pie, and punches Lister twice, healing his black eye and broken rib. Kryten realises that this is actually the end of the bar-room brawl that got them fired, and a huge fight breaks out in reverse. ("It's not a bar-room brawl: it's a bar-room tidy! UNRUMBLE!") Everything is restored to its original state, and the Dwarfers realise that they cannot stay on a backwards Earth. Before they leave, the Cat decides to nip off into the bushes and do his business...... before horrifyingly realising that everything occurs in reverse on this planet.

What the pub manager was really saying.

What the pub manager was really saying.