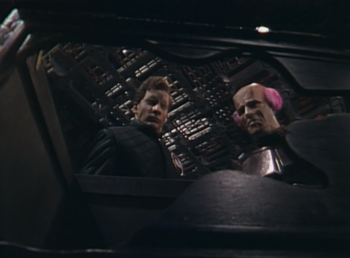 The day Rimmer was only the second-biggest smeghead among the crew.

Red Dwarf is evacuating. Holly has spotted five black holes on their route and it's not safe for anyone to remain aboard while she navigates around them. Kryten and the Cat depart on Blue Midget, while Rimmer and Lister take Starbug for a 12-hour trip before joining back up, each of them taking a few valuables just in case.

And then a meteor hits Starbug and it crashes onto a desolate ice world.

Unable to dig out, Lister and Rimmer wait days for the others to rescue them. With no real supplies and the temperature dropping, Lister is forced to increasingly desperate measures to survive, which mainly equates to trying to ration out the inadequate edibles and burning anything flammable... mostly, Rimmer's stuff. It reaches a breaking point when Lister, having expended everything flammable, wants to burn Rimmer's camphor wood chest. Rimmer refuses and insists that Lister's guitar should be burnt first. He leaves to give Lister time for one last song (and because Lister is an awful musician). Once Rimmer is off the ship, Lister traces the guitar on the back of the chest, cuts it out, and puts it in the fire barrel while stashing the guitar in a locker.

Rimmer returns and is astonished to see the guitar burning. He is truly impressed by Lister's sacrifice and says so, because he knows the guitar meant as much to Lister... as the camphor wood chest. Lister is increasingly chagrined as Rimmer goes on to explain that the wooden chest was the only thing his father gave him besides cruelty and disappointment and how devastated he would be if it got so much as scratched. Rimmer then insists on burning the rest of his possessions to honor Lister's sacrifice.

Kryten and Cat arrive on a dogsled (actually a Kryten-sled) at last. Rimmer begins telling them about how he's seen a new side of Dave Lister and calls him a man of honor... while Lister shamefacedly retrieves his guitar from the locker. Realization dawns, and Rimmer has the chest opened to see the big, guitar-shaped hole in the back. With his face twitching in rage, he orders Kryten to get the hacksaw to exact revenge.