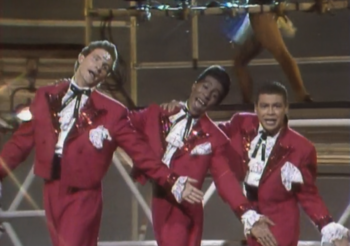 This episode has something to do with a parallel universe... but let's face it, this is what you really came to see, isn't it?
Advertisement:

Whiling away the hours yet again, Lister and Rimmer watch the Cat as he sorts through his dream recorder (at one point, coming across a music video of the three), trying to find a particular dream involving him, three girls and a family-sized tub of banana yoghurt. This prompts Rimmer to proclaim the Cat has no respect for women, which leads to Lister and Rimmer having a conversation about Rimmer's love life - or lack thereof. In particular they focus on Rimmer's insistence that his books on pickup lines and hypnotising girls are perfectly valid, indeed essential, approaches to dating. Lister reacts to this with derision and disgust, respectively, declaring Rimmer a misogynist who thinks of women as aliens that need to be conquered.

Holly suddenly appears on the monitor, claiming he has a new invention; the Holly Hop Drive, which will theoretically let the ship teleport across space and cross the vast distance separating them from Earth. Intrigued, the Dwarfers go to the drive room to test it out. Though it looks less than impressive ("It's just a box with Start and Stop on it!"), and they aren't exactly reassured when Holly, upon claiming that one mistake in his 14 billion calculations could kill them all, promptly forgets the 7 in his count down ("I've always had a bit of a blind spot with sevens!"), they continue with testing the drive.

At first, it seems to have failed. However, they detect a second Red Dwarf approaching. Computer contact is initiated and they discover that the Holly Hop Drive has sent them into another dimension, an alternate of their own universe. Hilly, Debra Lister, Arlene Rimmer; all of them are female counterparts to the Boys from the Dwarf. As it turns out, in this universe, history is parallel, with females being the dominant gender (Nellie Armstrong went on the moon, Wilma Shakespeare wrote "Rachel III" and "Taming of the Shrimp", "masculinists" burned their jockstraps in the 60s). The Cat is excited about meeting his own female counterpart, but, for some reason, his counterpart is an also-male Dog: smelly, slobbish, flea-infested headbanger/grungepunk.

With Holly and Hilly declaring it'll take about 17 hours for the Holly Hop Drive to be repaired so they can return to their own world (during which Holly and Hilly fall in love), the Boys from the Dwarf make themselves comfortable, ending up at a disco party with their counterparts. While the two Listers get on well enough, and Cat's disdain for Dog is ignored by the canine humanoid, Rimmer is quite unnerved because his female counterpart starts coming onto him — and quite aggressively. ("Come on, give us a snog! I promise I won't try and take off your underpants!") Eventually, it drives him back to the male's Red Dwarf, while Deb and Dave stay behind to keep on drinking.

The next morning, the two Listers wake up in Arlene Rimmer's bed together, piecing together that, yes, they did have drunken sex the night before. As the two Rimmers naturally arrive to gloat and taunt, a certain disturbing factoid is revealed: in this dimension, it is the men who fall pregnant from sex, and neither of the Listers used protection. Dave is horrified at this fact and distraught at Deb's insensitivity to the subject. ("Sorry? That's it? Sorry? Wham, bam, thank you, mister?") However, Holly (covered in lipstick) informs the crew that the hop drive is fixed, and that if the male crew don't leave now, they'll be trapped. Back in his own reality, Lister is reminded about the kids that they saw during the future echoes, all while taking a pregnancy test... which gets a positive result.