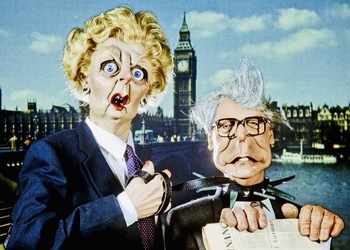 Just like the real thing.
"Following complaints from the Conservative Party that the BBC is biased against the government, we here on ITV, in the interests of political balance, would like to say: we hate the bastards too. Thank you."
Advertisement:

Spitting Image is a British satirical puppet show which ran on ITV from 1984–96, with a revival airing on BritBox as of 2020, making it perhaps the most successful non-Henson puppet show ever. The series could also possibly be one of the most influential programmes in UK television history, as by virtue of using puppets, they could get away with things that other shows could not.

For the entirety of the original run, Britain was ruled by the Conservative Party, so the government (and especially Margaret Thatcher) was the show's favourite target. However, it did not spare the opposition parties, the royal family, other countries' leaders, or celebrity figures outside of politics. Probably the most acerbically targeted country was South Africa during The Apartheid Era.

The series was nominated for ten BAFTA Awards, winning only one, for editing, in 1989.

The show ended its original run after 18 seasons, due mostly to the fact that they couldn't afford the new puppets they would need for a change of government; that, and the relatively bland composition of the John Major government, which lacked the epic grandeur of the Thatcher years and — with the notable exception of Major himself — almost defied satire. However, a revival premiered in late 2020 on the streaming service BritBox, with prime minister Boris Johnson, then-U.S. president Donald Trump, the 2020 American election cycle, the COVID-19 Pandemic, and prominent billionaires and celebrities like Kanye West, Elon Musk, and Jeff Bezos all providing ample opportunities for satire and parody. A 20th season premiered in late 2021. The showrunners have put all episodes of the reboot, and are currently attempting to upload the original show, onto YouTube for free here

The show has had several spiritual successors such as the traditional animation 2DTV, CGI series Headcases and part-CGI, part-puppet Newzoids but none have ever matched its popularity. The concept was brought overseas and foreign remakes have been made in France, Germany, the USA,note two times, in fact; a series of specials produced for NBC by the actual Spitting Image production staff, and the unrelated DC Follies Portugal, India, Italy, Serbia, Norway, Russia and Israel among others, with varying degrees of popularity — some bombed, others have outlasted the British original.

The show's team is also responsible for the famous video for "Land of Confusion" by Genesis, which features puppets of noted personalities (and the three members of the band) similar to those featured on the show.

Now has a Shout-Out page.

Tropes of the original run:

Tropes of the reboot:

The Spy Who Lived in Australia

The Spitting Image spoof regarding Peter Wright, who wrote an expose about MI5 that the British government tried to ban, starts with Wright doing the usual Bond intro, except he turns to spurt ink over the screen with a fountain pen.

The Spy Who Lived in Australia

The Spitting Image spoof regarding Peter Wright, who wrote an expose about MI5 that the British government tried to ban, starts with Wright doing the usual Bond intro, except he turns to spurt ink over the screen with a fountain pen.