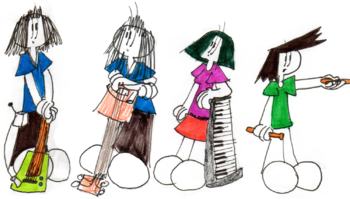 Before they couldn't, but now they can note (From left to right: Ian, Tina, Ellen and Brian)

Created by Thomas Fay Syndicate, The Plastic E-Gulls (TPEG for short) are a virtual/cartoon band, like Gorillaz, The Archies, Evelyn Evelyn and others.

TPEG has a Google site

and a Bandcamp page

I'm busy going nowhere, and it doesn't sound like fun
But it is when you try it, puttin' trouble on the run
Just like me, just doing nothing, and I'm making it a thing
A thing that I call aimless wandering.

This page is curated and monitored by Thomas Fay Syndicate