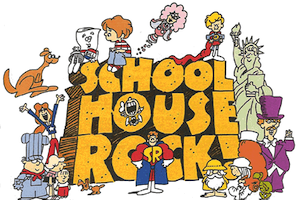 Schoolhouse Rock! was a series of educational short cartoons—so short that they fit in the space of a single commercial break—aired from 1972 to the early 2000s on Saturday mornings on ABC.

Back in the day, Saturday morning children's programming was supposed to be at least tangentially educational, and Merchandise-Driven advertising was severely limited. Networks couldn't advertise things related to the cartoons they were airing in those timeslots, so there was an opening for educational shorts even after running through cereal commercials.

At around the same time, ad executive David McCall noticed that while his son was struggling in school, he had no trouble remembering the lyrics to his favorite songs. Thus the idea to introduce basic learning concepts to young minds via simple-but-catchy rock, jazz, folk and pop tunes—most written by jazz mainstay Bob Dorough and eventual Broadway lyricist Lynn Ahrens—accompanied by entertaining visuals, animated by a team led by Tom Yohe.

The initial pitch was made to Michael Eisner, then vice president of ABC's children's programming, who brought along one Chuck Jones. Jones loved the concept, Eisner persuaded his regular program lineup to snip three minutes off each program's running time to accommodate it, and a legend was born. The Saturday morning format provided a perfect vehicle to repeat the shorts over and over until the lesson was learned; from the start, Schoolhouse Rock! was a roaring success as both education and entertainment, running for 37 episodes repeated endlessly over 12 years. Many of the shorts were permanently burned into the minds of young viewers.

Besides the educational content, the series won accolades for the consistently high quality of the songs - besides Dorough and Ahrens, performers included genre legends Jack Sheldon, Blossom Dearie, Essra Mohawk, and Grady Tate - and the overall cleverness of the lyrics and animation. Taking cues from Sesame Street and other contemporary educational programming, Schoolhouse Rock!

avoided the blandness and conformity plaguing most animated shows at the time and presented a hip, inclusive, fast-paced, and funny (often downright snarky) attitude to learning.

Episodes initially fell under one of four headings, in order of production: Multiplication Rock, Grammar Rock, America Rock (history, mostly released around the 1976 American Bicentennial) and Science Rock. 1983 saw an earnest but ill-fated attempt at Computer Rock (a.k.a. Scooter Computer & Mr. Chips) and in 1995/96 the original team reunited for the much more successful Money Rock. In addition, two new Grammar Rock segments ("Busy Prepositions" and "The Tale of Mr. Morton") were added. The shorts continued airing, now part of the One Saturday Morning block, until 2000. In 2002 the team reunited again to produce two new America Rock segments ("I'm Gonna Send Your Vote to College" and "Presidential Minute") as a Milestone Celebration. In 2009, yet another reunion produced Earth Rock, about environmental issues.

Between 1995 and 1998, a series of CD-ROM games were published by the now defunct Creative Wonders. A live stage show, Schoolhouse Rock Live!, began touring in 1993.

All of the classic Schoolhouse Rock! shorts are now available on DVD - save one installment of "Scooter Computer" thought lost until 2013, which eventually emerged on YouTube. The newer Earth Rock set is also available as a separate release.

This series is the Trope Namer for My Hero, Zero.

Tropes in the CD-ROM Games:

Example of:
An Immigrant's Tale