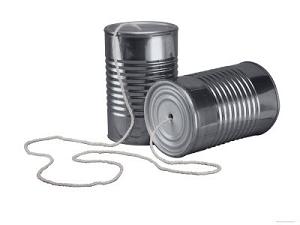 Ah, childhood. Treehouses and sleepovers and talking to your friends on tin can telephones. It's made of junk: just two old tin cans and a length of string, but it's the stuff that memories are made of. Occasionally you can see a variant that has a tube that travels underground. This variant is derived from early nautical vessels.

Truth in Television, of course, although the real thing only works if there is no slack in the string at all. In visual media, the string is just as likely to be portrayed as slack or winding its way around, under, or over things, which wouldn't work.

Even before the ubiquity of cell phones, they had largely been supplanted by cheap walkie talkie sets by The '70s. Of course, now that cellular phones are cheap enough that even children have them, this is a sadly disappearing relic.

Alternative Title(s): Tin Can You Hear Me Now