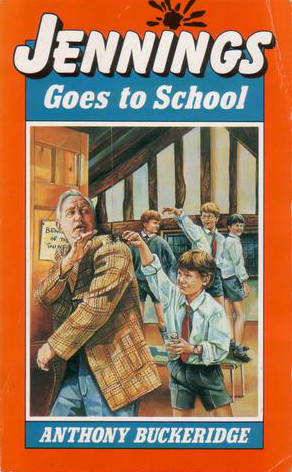 A 25-volume series of comic Boarding School novels by Anthony Buckeridge, which was also adapted for radio. The first volume, Jennings Goes to School, was published in 1950. Sequels were published regularly until 1977, then after a 14-year gap, two more were released in the 1990s. All bar one are set in Linbury Court, a single-sex prep school (private school, ages 8-13 or so) catering to the middle classes.

Jennings is a well-meaning but impulsive boy, who frequently gets himself into comic scrapes — an attempt to help a cow over a fence ends with him trapped in a unlit basement cupboard. His best friend, Darbishire, attempts to act as the voice of common sense, but usually just gets dragged into the mire. The other boys in the dorm eventually catch on to this and, in one plot, set Jennings up with a broken radio, confident that the ensuing hilarity would be much more entertaining than any radio programme.

The principal teachers were the brusque but secretly kind-hearted Mr Wilkins, who had great difficulty understanding Jennings, and Mr Carter, an admitted Author Avatar, who was more tolerant but always knew exactly what was going on.

All the characters were usually addressed by surname only, though their first names were known.

The books and radio dramas were and still are hugely popular in Norway. "Stompa" (as Jennings' Norwegian nickname is) is a well-known and beloved character in Norwegian culture, in part thanks to translator Nils-Reinhardt Christensen's somewhat liberal translations, which moves the location from England to Norway and swaps English names, customs and traditions with Norwegian ones — though some of the credit has to go to Gisle Straume, who played "Lektor Tørrdal" (Mr. Wilkins) in the Norwegian radio dramas and whose stellar performance turned the character into one of the most memorable and quotable characters in Norwegian radio.

The Stompa series even spawned four movies, which were produced in The '60s and are still regarded as classics in Norway — or at least the first two are, since Gisle Straume reprised his role as Lektor Tørrdal in those, and the tone sticks closely to the books. The last two movies are less fondly remembered, both due to a lack of Gisle Straume and because, since the main actors were growing older, the scripts tried to follow suit by including some more mature themes and Freudian images that... really didn't fit the characters or the settings.

Books in the series

The books have been adapted into radio dramas, TV series, audiobooks, and a stage play.

These books include examples of:

The Norwegian translations/adaptations include examples of: