Literature / Jeeves and the Feudal Spirit 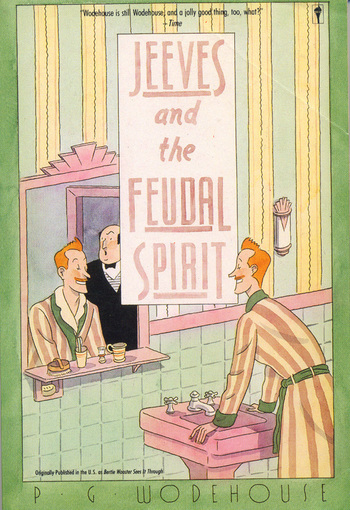 Jeeves and the Feudal Spirit is a 1957 novel by P. G. Wodehouse.

It is a Jeeves and Wooster story. When Bertie's sometimes fiancée Florence Craye expresses admiration for Bertie's new mustache, Bertie attracts the violent jealousy of Florence's current fiancé, G. D'Arcy "Stilton" Cheesewright. The large and intimidating Cheesewright longs to pulverize Bertie, but can't, because he has drawn Bertie's name in the upcoming Drones Club dart contest, and will lose a large sum if Bertie is injured.

Meanwhile, as so often happens, Bertie has been summoned to Brinkley Court, his Aunt Dahlia's estate. Aunt Dahlia is trying to unload her money-losing magazine, Milady's Boudoir, and is trying to coax wealthy businessman L.G. Trotter into buying it. Bertie is summoned to cheer up Trotter's stepson Percy Gorringe, who is moping around because he has been rejected by Florence Craye. Also at Brinkley Court is Stilton Cheesewright, who has broken up with Florence, blames Bertie for it, and is bent on revenge.